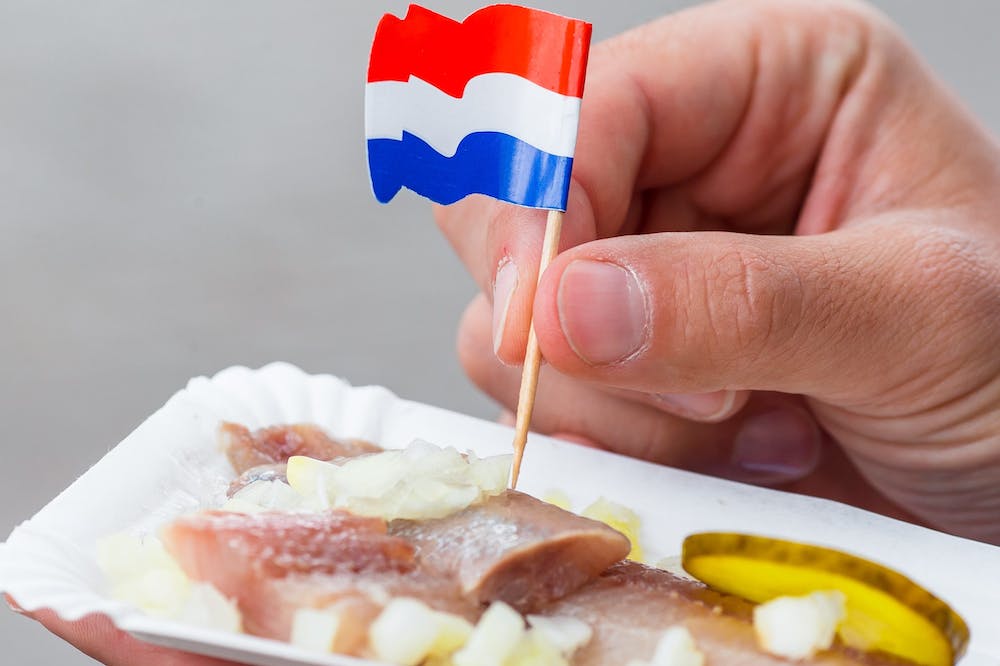 A short introduction to the treasure of the sea – Herring:

People along the Atlantic coast were catching and eating herring some 3000 years ago. But it was not until the middle ages that herring was regarded as nourishing, affordable food. For centuries, herrings continued to a staple food for the poor as the fish were plentiful and cheap. In Norway they were given the romantic description of “the gold of the sea” while in Scotland herrings were known as “silver darlings”.

The Dutch prospered on herring, and it was said by some that Amsterdam was founded on herringbones. By the mid 15th-century herring fishing was one of Holland’s most important industries. Its growth owed much to the ingenuity of Willem Beukels, who, in 1338, found a new and better way of curing herring and preserving the catch in barrels. The fish were gutted as soon as possible after they had been netted and were then immersed in brine, rather than being sprinkled with salt as had been previously. The Dutch also devised the drift net, dramatically increasing the size of the catch. Wars with Britain and France impacted on the Dutch herring industry in the 17th century and it went into a long decline.

Over the centuries, herrings were versatile dish. By the 19th century, they were being eaten, raw, fresh, salted, cured, pickled and fermented, while tarragon, cherries, sherry and even curry powder were combined with the fish to create tasty dishes. Kippers became a staple of the British breakfast table, thanks to the introduction of a new curing process in which the herring was split, gutted and hung up to smoke and dry. The Germans created the soused rollmops, while the Swedes devised surströmming. A baltic herring caught just before spawning and treated with just enough salt to prevent rotting before being canned and set aside for fermenting for at least six months.

The herring, once fished has been cleaned out and then stored in brine (a saltwater solution). The brine makes the fish soft and salty – bringing out the taste of the herring. This is where the argument begins whether it’s ‘raw’ – has the fish ever been braised, cooked or fried? No!

After having been submerged in the brine, the fish is sort of cured. Would you consider a pickled cucumber a raw cucumber? Probably not.

After the herring is taken out from its brine bath, it is thoroughly cleaned by removing the skin, the insides and, for as far as possible, its fish bones. The few fish bones left are very soft due to the brining and easily can be eaten with the fish.

It is widespread to eat herring at a fish stall, and many of us have their favourite fish stall. Once you order the herring, you have the option to choose to add onions and pickles. While this is to personal taste, would you try it for the first time we recommend to eat it pure.

Now it is to earing, how do you handle your herring? The stereotype is that you pick up the herring by its tail, optional dip it in onion, and lower it down your throat and bite a piece off. Is this is the only way to eat it? No – you may also ask for the herring to be cut in pieces. Some say this is typical for Amsterdam, wherein old days, poor people asked for one herring to be cut in pieces so they could share it with family members.

For sure it is the more comfortable and most likely the more elegant way to eat the herring.

Tweet
Email this page to a friend. Email
No

We use cookies to enable the proper functioning of our websites. By clicking 'Accept All', you consent to the use of cookies to enhance your user experience, security, analytics and customization. For more information and to understand how we use your data for required purposes, and how to change your consent, please visit our Privacy Policy.